First, they had to find out where Crumble could meet a dwarf. This wasn’t really tough though because they all knew dwarves loved gemstones and other luxury found beneath the ground. Accidentally, there even was a well-known gold and gemstone boutique in the city, so the owner most certainly was a dwarf. Crumble would make sure just in case.
The most difficult thing was how to make this person either fix the portal himself or get someone else to do this. He would have to talk to him, find out what the quarrel was about and then succeed … Maybe he could lure the dwarf with something they couldn’t resist? But this person already worked in and owned a gemstone business so it would probably be hard to find something as well.
Also, he had to be careful not to ruin the whole thing by acting strangely and maybe making the dwarf angry. If only they had a dwarf friend to ask what the argument was about! If only they could think of an easy solution …

After Stella and Jenna had read all of the pages (which were a lot), Crumble and bunny Clemens joined them and they discussed what to do now. It was certain they had to convince someone (a dwarf) to fix the portal so they could get the great book of counterparts, mix a potion for Clemens and also think of something to do about the Black Raven one day … But they all agreed the portal and getting “normal” Clemens back was most important at the moment.
Crumble had to work as a translator from bunny to human language and wrote down everything Clemens said. It was a hard decision, but the magician made clear it would be best to send anyone but a magician to the dwarves because of the fight between the different races. He didn’t know what exactly it all was about, but usually it was something silly and not really important. Yet, there were a lot of bullheads on both sides who took everything way too serious. This is why he suggested sending Crumble as a neutral friend to solve this task.
Stella was horrified and feared losing her beloved and special cat in this mission, but everybody else told her it would be just fine and he would surely succeed because of all his skills and magic. She had to give in but wasn’t happy about it.
Late that night, Crumble was already sleeping in his basket (and bunny Clemens on a pillow), Stella finally went to sleep. When she just wanted to jump on her bed, she noticed a piece of paper on her pillow: 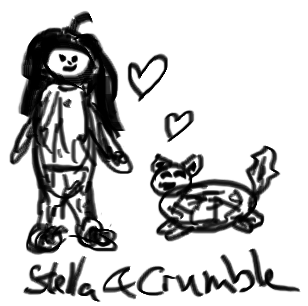